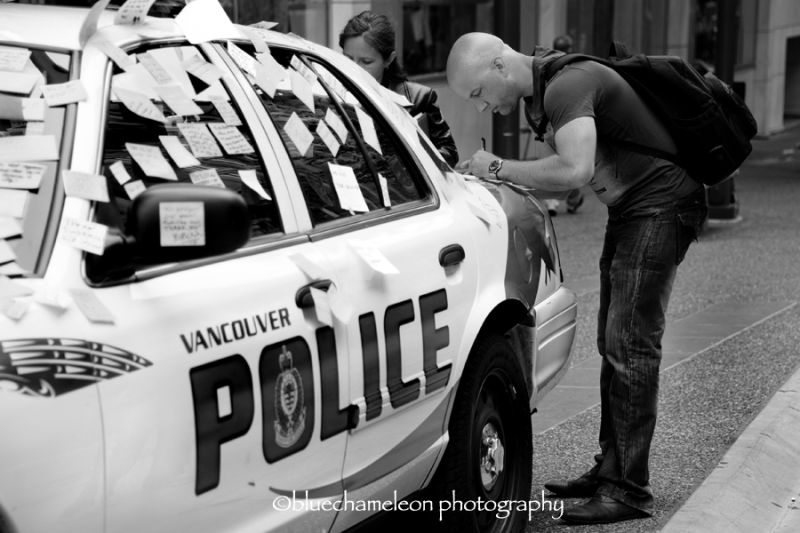 Previous Next
← previous day next day →

Posted by bluechameleon (Vancouver, Canada) on 19 June 2011 in Documentary & Street.

"I would thank you from the bottom of my heart, but for you my heart has no bottom."
--Author Unknown

We are getting back to normal now, with hundreds of volunteers pitching in to clean up the city after the riots. Messages are written all over the boarded up windows and this photograph shows a Vancouver police car covered in "thank you" post-it notes from the people of Vancouver. Thanks to social media and the many photos that were taken that night by those rioting (and boasting about it) these thugs are being caught and charged.

We are slowly getting back to normal here -- the city being peaceful and safe once again...

Vote on The 2014 Photoblog Awards

My heart goes out to you Sharon, and everyone in Vancouver. Mob mentality can be so cruel at times, but this is such a beautiful image of all that is good in us.
http://lefeverphotoblog.wordpress.com/

This was truly a day of national shame Sharon! Vancouverites are wonderfully warm, generous and loving people in the true Canadian spirit! How did we ever let a small group of mean spirited indivituals shame us so? It is the scenes from the aftermath that have restored my pride in being Canadian! Thank you for sharing Sharon! ;-)

@Eric Cousineau: Thank you Eric. It's scary what people (anywhere in the world) are capable to being lead into...

nice postscript to a shameful episode.

Amazing picture !
I don't think this kind of scene (people sticking thankful messages on the police cars) may happen here.
Your picture is a great positive message.

that's cool. good to see people showing their appreciation and that things are getting back to normal.

A very good image for resetting the scales back to balance. I have been following the story, slowly shaking off the abiding sadness that was clinging to me after seeing such stupidity from the drunken idiotic horde that in no way represents a city or country... and you're right, this can and does happen any and everywhere. That amount of drinking, high passions for the Canucks to win (though the main instigators would have rioted win or lose), and so many people in a confined area : recipe for disaster. There will be lessons learned from this one, as there were in '94. Meanwhile, I'm glad you are getting your city back.

@Rick: Thanks Rick. Yes, although the VPD and riot squad did a great job, there is lots to learn from this situation. I don't think that many people will be allowed in the downtown core again (thankfully). Access into the city was closed at one point (you could leave, but could not get in) but should have been done sooner. Honestly, I did not see this coming, but will admit that when I was walking home that afternoon, and through the downtown (where I live) there were so many drunk people on the street before 5pm. There was tension in the air, and a whole different vibe, but I didn't think there would be a repeat of 1994.

I was here in Toronto when the Blue Jays won their first World Series in '92 : it was an all night love-fest of Yonge street up and down with people embracing and high-fiving each other, sitting up on rooftops with beer, and the cops played it just right. They let everyone enjoy the moment and kept an eye on things... but when they won again the next year the whole vibe had changed, and several hooligans were out making trouble. I felt the altered atmosphere and went home. For the G20, which was stupidly forced upon the downtown area and cost over a billion dollars, I knew there would be trouble and we didn't have alcohol thrown into the mix like what happened in your city. Most of the hardcore vandals and rioters here came from outside Toronto, on a mission, but far too many people stood around doing nothing, or taking pictures and thinking it was all some kind of free entertainment... sad sad sad. CBC reporters mentioned smelling booze very strongly at one o'clock in your crowds... another recipe for disaster. This latest regrettable event has gripped the nation. We are all hoping never to see it again. It isn't hard for me to imagine what would happen if the Maple Leafs ever got within sniffing distance of the Cup... but of course, it ain't gonna happen. ;-)

Back to normal, then. Nice to thank the PD for his work.

A lovely photo of this outpouring of support for the police who, I assume, were largely responsible for bringing the lunacy to an end. I enjoy hearing that the rioters/anarchists are being caught partly because of their own egos. Poetic justice, eh?

Incredible - really!! Thanks for sharing some of the scenes with us here!

oh yeah, i saw this in the news! good to see you were able to capture this scene.. nice shot!

Vancouver is one of the world's great cities and it won't be sullied by a handful of fools. Great piece of photojournalism!

Great image. I'm glad it didn't get any uglier than it did. In Dallas if a cop came back to his car with all those sticky notes, he'd kick the first ass he could find, riot or no riot.

A very interesting sequel to the violence seen previously. Oh we sure could not see that in France where people love not to love the Police but always do when they had a problem and did need them (this is so hypocritical, even if yes, our police is not the best but hey human beings & harsh work, that is not easy neither). An excellent documentary shot & a moving one.

A wonderful shot. It is amazing to see this outpouring of good-hearted, good-willed, positive support. Marvelous to see the other side of this riot issue !! Good reporting Sharon.

This is great to see. I am glad things are back to normal. I have seen first hand when mob mentality grows out of hand, it's a scary thing.

Great composition and goes so well together with the text.

Ashtoning situation! It's unbelievable for Europeans like us! Great scene!
Have a nice day.

Would never have expected it in the great city of Vancouver

Framed and Shot from Norway

It's always interesting to see what the other side of the coin is like. A great capture!